• Buy 3 or more paperbacks and get 20% off the list price (discount applied automatically).
• Build a library of books on Southeast Asia – visit Book Bundles for ideas.

• Buy 3 or more paperbacks and get 20% off the list price (discount applied automatically).
• Build a library of books on Southeast Asia – visit Book Bundles for ideas.

Buy 3 or more books and get 20% off (discount applied automatically).

Klong Prem prison, Thailand. The “Bangkok Hilton”, where 600 foreigners among the 12,000 inmates of this walled prison city also wait and rot. Among the tragic, ruthless and forgotten, one man resolves to do what no other has done: escape. This is the true story of drug smuggler David McMillan’s perilous break-out from Asia’s most notorious prison.

From his arrest at Don Muang airport, to awaiting trial inside Klong Prem, he provides an insight into the lives of the British, Australian, American and other Western prisoners as they are destroyed by disease, neglect and despair. Death is their only way out. Two weeks before a near-certain death sentence McMillan escapes, never to be seen in Thailand again. 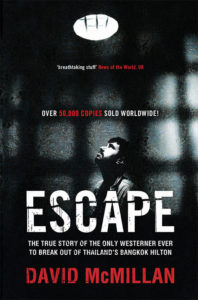 “Once McMillan puts his daring plan into place, the action rips along like a thriller . . . breathtaking stuff” News of the World, UK

“This is one of the world’s most notorious—and remarkable—heroin traffickers: Melbourne man David McMillan. Despite still being on the run, McMillan has written a book, Escape, about … his amazing breakout in Bangkok” The Australian

“The jailbreak was straight out of a movie” The Age, Australia

“The book is exceptionally well written … Escape begs to be made into a movie” Pattaya Mail, Thailand

“Inmates at HMP Erlestoke near Devizes, Wilts [UK], can borrow books from a catalogue including Escape by David McMillan, which describes how he broke out of Thailand’s ‘Bangkok Hilton’ prison” The Telegraph, UK

“In the style of Howard Marks—the international drug dealer who became a best-selling author—McMillan is touting a book about his prison escapades. The book, entitled Escape, is selling well in Asia” London Evening Standard, UK

“David McMIllan is better known as ‘the only Westerner to have escaped the notorious Bangkok Hilton’ … his story, Escape, has been selling well throughout Southeast Asia” The Nation, Thailand

David McMillan’s first arrest was for breaking into a match factory at 10 to enlarge his matchbox-label collection. At 12, putting crime aside, he then began presenting a kids’ nightly news programme for the Nine Network. News reading and the straight life didn’t stick however and McMillan was thrown out of two of Melbourne’s best schools before returning to crime and becoming one of Australia’s most notorious smugglers, leading a group that developed the bag-swap system at Sydney’s Kingsford-Smith airport. Following a State–Federal taskforce operation, massive police raids and one of the country’s most expensive trials

McMillan was sentenced to seventeen years in prison. While awaiting trial, McMillan again made the headlines after attempting to escape Melbourne’s high-security Pentridge Prison by helicopter using former SAS personnel.
Following release from prison on parole, surveillance immediately resumed leading McMillan to return to the life from which escape appeared impossible. Under false identities, he fled to Bangkok where he was promptly arrested and jailed. Following his dramatic escape from prison in Bangkok, the story of which is retold in this book, McMillan slipped to the Afghan border and again onto the smuggler’s trail. In the years that followed, he avoided a life sentence in Pakistan and serious time in Colombia before a stretch in Scandinavia brought an end to his most dangerous life.

In the late 90s, he retired to London, where he now lives. In 2014, the Thai government requested McMillan’s extradition on the 1993 drugs charge for which he was never convicted. After almost two years of hearings, the Thais withdrew their request, one week before he was due to be taken to Bangkok.